Simon Gault is one of the most renowned stars of the New Zea-land culinary scene. He has worked in New Zealand and internationally in a large number of establishments, including the starred ‘Leiths’ restaurant in London, and the prestigious ‘Thornbury Castle’.
Simon Gault is the former executive chef and co-owner of the Nourish Group, a collection of award-winning restaurants in New Zealand, and is the owner of Sous Chef, an online business which imports, distributes, and sells the best ingredients produced by artisans around the world.
Famous for his appearance in five editions of ‘MasterChef New Zealand’, as well as being the star of the television series, ‘Chef on a Mission’, he is the author of four successful cookery books including ‘Modern Classics’ by Simon Gault. He is also proud of his role as ambassador for the well-known brands, Audi and SMEG. 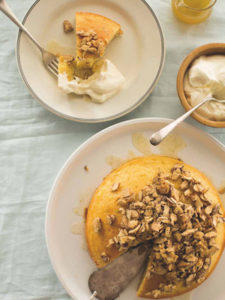 Italians often eat cake with extra virgin olive oil cake for breakfast, but without the lemon and honey syrup I have added here.
If you prefer a less moist cake, reduce the amount of syrup by half. The candied almonds can be produced in large quantities and are perfect when added to many other recipes.

For the candied almonds

For the lemon and honey syrup

For the candied almonds, heat the oven to 160°C, place the sliced almonds on a baking tray and let them toast in the oven (3-5 minutes).
Pour the sugar and water into a pan with a thick base, bring to the boil and leave to boil. Do not stir but gently move the pan so the mixture moves around and cooks evenly. Continue like this until the mixture becomes a light blonde colour. Take the pan off the heat and add the toasted almonds, mixing well until the sugar mixture begins to crystallize.  Poor onto a baking tray, let it cool and then store in an airtight container.
For the cake, heat the oven to 180° C. Put the sugar, the Santagata extra virgin olive oil and the lemon zest in a mixer, start the mixer and add the eggs one at a time allowing the mixture to combine well between one egg and the next. Add the limoncello, the chopped almonds, the flour and the baking powder. Mix well.
For the lemon and honey syrup, combine all the ingredients in a small pan, warm until the honey (or maple syrup) melts into the other ingredients but do not let it boil. Set to one side.
Butter a 20 cm cake tin and line with greaseproof paper. Pour the mixture into the cake tin and bake in the oven for 35 minutes or until the cake is golden and cooked through. Remove the cake form the tin while it is still warm, use a skewer to make some small holes and pour the syrup over the cake. Sprinkle with the candied almonds. Slice and serve with whipped cream.

These recipes are taken from chapter 5 of the book “An Olive Oil Family” written by Cristina e Federico Santagata on the occasion of the 110 years of their company and pubblished by Olio Officina Edizioni.