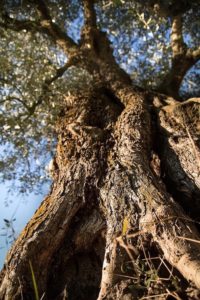 The first time that Gaio Plinio Secondo was taken to Rome by his father as a child, one spring almost 2,000 years ago, he saw, for the first time, a tree which fascinated him due to its richness in fruit and the shape of the trunks. Gaio Plinio, or rather Pliny the Elder, was born on the banks of Lake Como, where the climate of the time was too severe to cultivate olive trees.

Several years later, he became a curious naturalist, in the Naturalis Historia, one of the first natural history works to have survived, he wrote: «Firmissimae ergo ad vivendum oleae, ut quas durare annis CC, inter auctores conveniat… Ex diverso brevissima vita est punici, fico, malis » «So olives are very resistant in life, so much so that the authors agree they live up to 200 years…. On the contrary, life is very short for pomegranates, figs, and apples» It is precisely this characteristic of being long-lived which makes the olive one of the most environment-friendly fruit trees in nature, as we will see.

The most acclaimed sources tell us that the domestication of the wild olive trees took place in the fourth millennium BC, in the southern Levante region . Olive growing later spread towards the west, where the local wild forms of olive trees were selected and cultivated, or hybridised to improve their agricultural characteristics . The olive became a symbol of the Mediterranean world, to the extent that its presence traditionally defines the climatic region of the Mediterranean. For centuries, due to its rustic qualities, the olive has represented the centrepiece of the economic importance of rural development and one of the main sources of wealth and employment in Mediterranean regions relatively poor in rainwater. The most ancient groves are, still today, traditionally spread across steep, terraced slopes, such as those found in the Cinque Terre. While the economic importance of the olive has always been recognised, its ecological value has never been underestimated.

This text is taken from “The olive and the oil: a history of cultivation and nature” written by Tommaso Sitzia, the introduction to chapter 4 of the book “An Olive Oil Family” written by Cristina e Federico Santagata, pubblished by Olio Officina Edizioni.